18 November 2015, at approx. 12:45 PM, officers responded to the 200 block of Stockton Street for a report of a white male adult, wearing a gray tank top t-shirt, with numerous tattoos, who was breaking into a trailer parked at that location.

When officers arrived, they located the trailer, which had been burglarized, along with a person matching the suspect’s description, who was now in a nearby creek bed. Officers contacted this subject who was identified as Chad Hilton, 28 of Mi Wuk. Hilton is on felony probation for identity theft.

During a search of Hilton’s person, a credit card which was not issued to him was located. Also in Hilton’s possession were some other items, which had been taken during a vehicle burglary in the same area.

Hilton was taken into custody without incident. He was transported to the Tuolumne County Jail and booked for felony burglary and misdemeanor possession of stolen property. 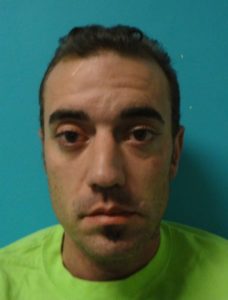