Just after 11:00 p.m. on Thursday, July 4th, one of our officers witnessed a red 1991 Toyota pickup do a burnout at the intersection of S. Washington Street and Stockton Road. The officer attempted to conduct a traffic stop, but the driver, 22-year-old Chance Bailey of Tuolumne, failed to stop and led the officer in a pursuit through the backstreets of Sonora. At one point, Bailey attempted to blackout and hide in a driveway on Morningstar Drive, however, our officer spotted him and attempted to make contact, but Bailey sped off nearly striking the patrol car.

Bailey continued to evade our officer and made his way to out of town to Tuolumne Road where eventually a decision was made to turn the pursuit over to the Sheriff’s Department and CHP units in the area.

The pursuit ended on Hani Drive in Tuolumne and Bailey was taken into custody by the Sheriff’s Department for charges directly related to his actions after we turned over the pursuit. The Police Department is also seeking felony and misdemeanor charges against Bailey for acts leading up to that point. 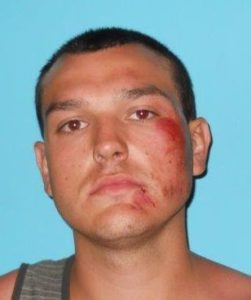