18-year-old Daniel Charles Wandersee Jr. of Jamestown was arrested today for having a loaded firearm on school grounds and for being in possession of a stolen firearm.

Shortly after 10:30 a.m. today, Cassina High School administration notified our office that a student was seen on campus with a firearm.  At the time of the call, the 18-year-old student (Wandersee) had reportedly just left campus on foot.

Our officers responded to the school and contacted staff to better understand the situation.  While officers were on scene, Wandersee returned to campus and was immediately taken into custody.  During a search of his person, our officers located a .40 caliber semi-automatic firearm in his waistband. The firearm was loaded with one round in the chamber and an empty magazine in the well.

The firearm in Wandersee’s possession was reported stolen on the morning of Monday, January 6th, from a parked vehicle on Southgate Drive.

We are still looking into other aspects of this incident, but there is no indication at this point that Wandersee was planning to use the firearm at school; or that he had intended to target anyone specifically.

Wandersee was booked at the Tuolumne County Jail on two felony charges.  His bail was set at $30,000. 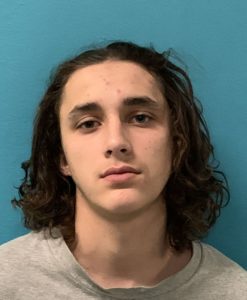