During the last several months a volunteer from Sonora High School, assisted by Sgt. VanderWiel and City Historian Pat Perry, assembled photographs of the past Chiefs of Police of the City of Sonora. This project was to recognize and honor those who have served as Chief of Police for the City.

Unfortunately, throughout the years, the Police Department and City didn’t maintain a photographic record of the Police Chiefs. Compounding this was the fact the City has not retained any records of the past Police Chiefs. This made it challenging to track down records to identify the Chiefs who have served the City, along with locating any photographs of them.

In 1928, California State Legislature officially changed the title of City Marshal to the title of Chief of Police. Even though the City has a long history of law enforcement, dating back to the 1850’s, at which time Officers were referred to as City Night Watchmen, it was decided the display would start at 1910 and moved forward.

The volunteer, Sgt. VanderWiel and Pat Perry were able to obtain photographs of several of the past Chiefs, which have been framed and displayed inside the department. However, there are still a few photographs needed to fill some empty frames.

Below is a list of former Chiefs we are still attempting to locate photographs of. If you have or know of someone who may have photographs of any of the below listed individuals, please contact the Sonora Police Department at 532-8141. We would love to display their photograph if at all possible. 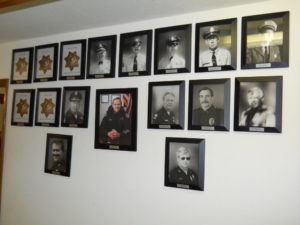