Early this morning, 50-year-old Keith R. Dantonio of Groveland was arrested for driving under the influence, possession of methamphetamine and possession of drug paraphernalia.

Just after 6:00 am, on the morning of September 10th, the Police Department received a call from a concerned citizen regarding a vehicle parked on the sidewalk in front of a business in the crossroads shopping center.  The caller also shared that the occupant of the vehicle appeared to be passed out.

The vehicle had driven away by the time officers arrived on scene, but they were able to locate the vehicle a short distance away.  It was determined that Dantonio, the sole occupant of the vehicle, was driving while under the influence of drugs.  A search of his person and vehicle produced several syringes, a meth-pipe, and methamphetamine.

Dantonio was booked at the County Jail for several misdemeanor charges. 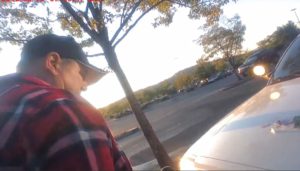