On Saturday, January 14th, 2017, at approximately 11:45 a.m., the Sonora Police Department was called to the Grocery Outlet market for a report of a shoplifter. When the officer arrived, he was directed to a female, later identified as 30-year-old Stephany Marie Shelman of Sonora. Shelman initially provided the officer with a false name and denied being in possession of stolen property. Upon further investigation, the officer determined Shelman’s true identity and was able to locate stolen merchandise in Shelman’s purse. Also during a search of her purse and clothing, the officer located multiple baggies of methamphetamine, other narcotics such as Methadone and Oxycodone, a hypodermic needle and a meth-pipe.

Stephanie Shelman was booked at the Tuolumne County jail for theft charges, drug charges and for providing a false name to a peace officer. Her bail was set at $7,500. 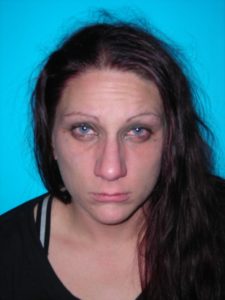