58-year-old Angela A. Holcomb of Stockton was arrested yesterday for attempting to pass a fictitious prescription for Codeine.

Just after 5:00 pm Monday, November 18th, our officers responded to the Save Mart pharmacy on Mono Way for a report of prescription fraud in progress. Upon their arrival, they were directed to Holcomb, who was waiting nearby for the prescription to be filled.

A  savvy employee at the pharmacy became suspicious because of the regularity of prescription fraud for Codeine. The employee checked the Controlled Substance Utilization Review and Evaluation System (CURES) database and discovered Holcomb had been jumping around to multiple pharmacies. Pharmacy personnel then contacted the doctor listed on the prescription who confirmed the prescription was, in fact, fraudulent.

Holcomb was interviewed and ultimately arrested for attempted prescription fraud and burglary (for entering the store to commit a felony). She was also arrested on an outstanding misdemeanor warrant for theft out of Stockton. 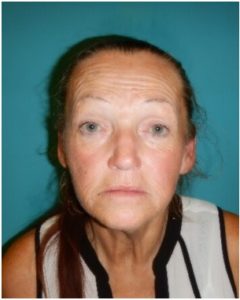