Shortly after 5:00 pm on March 4th, officers responded to the 400 block of Stewart Street for a report of a disabled vehicle in the roadway.  When officers arrived in the area and attempted to contact a male subject presumed to be associated with the vehicle, he took off running leading officers in a foot pursuit toward downtown Sonora.  Officers were able to quickly catch the suspect, Joshua Ryan, and take him into custody for resisting arrest.   Officers then learned that the 2003 Honda Pilot previously reported as disabled, was actually stolen by Ryan from a home on Stewart Street.

Although Ryan was able to get the vehicle out of the victim’s driveway, he was unsuccessful at driving it from the immediate area.  Ryan’s quick apprehension was in no small part due to an aware citizen who called in the suspicious vehicle.

Ryan was booked at the Tuolumne County Jail for Vehicle Theft and Resisting Arrest, as well as two misdemeanor warrants out of Oakdale.  Ryan’s bail was set at $10,000.  We are currently investigating Ryan for at least one other theft occurring earlier that afternoon. 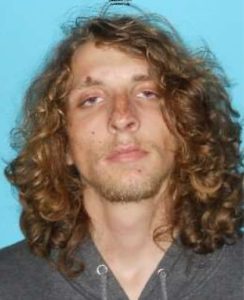