37-year-old David Sean Johnson of Columbia was arrested last night for being a felon in possession of ammunition, and for violating the terms of his felony probation.

Just after 10:00 pm last night, SPD officers were called to the area of 45 South Shepherd Street for a man yelling and hitting his vehicle.  As the first officer arrived on scene, he saw Johnson, shirtless and matching the given description, move behind a parked SUV and break the rear window with an ax.  The officer quickly detained Johnson and secured him in his patrol vehicle.

The investigating officer learned that when a near-by resident became concerned about Johnson’s behavior, the resident asked him to leave.  In response, Johnson became more agitated, removed his shirt, and began challenging the resident to a fight.  Officers also learned that the mentioned SUV belonged to Johnson.

Johnson was determined to be on probation for felony battery.  A search of Johnson’s person produced a Colt .45 round in his pocket.  Additionally, Johnson was determined to be intoxicated, which is a violation of the terms of his probation.  Johnson is also prohibited from possessing firearms or ammunition due to prior felony convictions for weapons charges and other felonies.

Johnson was booked at the Tuolumne County Jail for Felony Violation of Probation, Felon in Possession of Ammunition, and Public Intoxication. 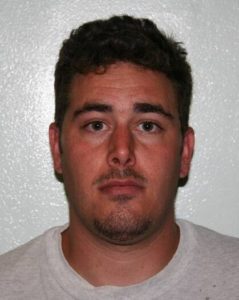